Electroluminescent (EL) sheets are lighting panels with some remarkable qualities: The foil is just 0.8 mm thick and emits light when connected to an electric current. Available in a variety of colours and shapes, the homogeneous EL lighting has become a serious alternative to conventional illuminants—especially in areas where custom designs with a minimal thickness (< 1 mm) or power consumption (1W/100 cm²) are needed and unwanted glares or shadows must be avoided.

EL film is an active light source that shares the same characteristics as indirect light reflected from a matte surface. The light seems to come out of nowhere, it appears ethereal and mysterious. It does not glare and is easy on the eyes. Electroluminescence produces very short light waves, which are perfectly perceptible to the human eye. A three-dimensional light effect can be achieved by bending the film. It can also be attached to the surface of any object to make it glow.

An EL film is a so-called Lambertian radiator: Unlike with neon lamps, filament lamps or LEDs, the brightness of the surface appears the same from all angles of view; electroluminescent light is not directional and therefore hard to compare with (thermal) light sources measured in lumens or lux. The light emitted from the surface is perfectly homogeneous and is well-perceived by the eye. EL film produces single-frequency (monochromatic) light that has a very narrow bandwidth, is absolutely uniform and visible from a great distance.

Characteristics of our electroluminescent films:

- EL film generates very short light waves, which are perfectly perceptible to the human eye.
- EL film delivers uniform, homogeneous illumination over the entire surface
- EL film is flexible and very durable.
- EL film is great for pulse-control applications (light animation).
- EL film provides flicker and glare-free illumination (minimal emission of UV and infrared light).
- EL film guarantees lossless and glare-free light emission without shadows.
- EL film is visible from a far distance with high contrast—even in fog or dense smoke.
- EL film is tearproof, shockproof and hard-wearing (bears loads up to up to 250 kg/cm²).
- EL film has a lifespan of 15,000 hours at 110 volts/400 Hz. The lifespan increases with animation, e.g. tenfold with a 10-channel sequence.
- EL film fits where no other light source does (< 1 mm).
- EL strips can be custom cut to any length.
- EL film is made of a durable material and is resistant to vibration and acceleration.
- EL film boasts the lowest energy consumption in relation to visibility compared to other light sources.
- EL film provides superior visibility—even in fog or smoke.
- Electroluminescent film is easily added to existing installations at a low cost.
- EL film is a cold light source that generates virtually no heat (high efficiency).
- An A4 sheet (630 cm²) requires 6 watts of power.
- EL film requires approx. 0.15 mA/cm² of electric current.
- EL film is protected with PE insulation. However, this means it is not waterproof.
- EL film is designed for indoor use. Outdoor use is possible with protective layers against water and UV light.
- EL film produces glare-free and homogeneous light and is visible from far away.
- EL film enables smooth dimming from 0 to 100%.
- No unexpected failure—the brightness of EL films decreases gradually over the lifespan.
- EL films come in different colours.
- EL film is disposed of in accordance with the European Waste Catalogue (EWC) code 080302
- Minimal generation of heat—EL film generates 98% light instead of heat, which means tremendous energy efficiency and allows for use in environments with strict thermal requirements.

In comparison, this diagram shows the loss of energy in a conventional light bulb: 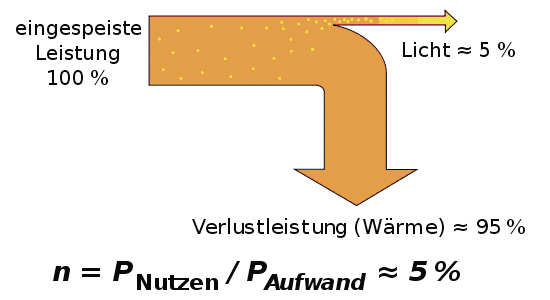 White or blue?
The colours: 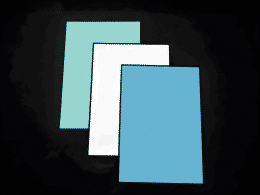 Note:
The colours shown are an approximation and may differ from the actual colour of the film. Errors and omissions excepted.

Calculate the area you wish to illuminate and order the adequate size of EL sheets. Install the sheets and connect them to one of our supply units. Connect this unit to a power source and you’re done.

EL crystals in the pigment layer emit light starting at 20 VAC, which is the minimum voltage required to achieve an electric field strength that excites the electrons sufficiently. The luminance, or brightness, depends on the amplitude of the input voltage.

Increasing the input frequency results in a colour shift towards a shorter wave length, which appears brighter to the eye. Both amplitude and frequency should be adjusted carefully to the operating instructions for the EL film and the specific application, as a higher operating voltage and/or frequency will generally result in a shorter lifespan. The lifespan of an EL film depends on the strength of the electric field, the on/off interval, and the exposure to UV light. It can be increased with a blinking or stacking sequence. In optimum conditions and with a voltage of 110 VAC and a frequency of 400 Hz, an electroluminescent film can achieve a lifespan of 15,000 hours.